A downloadable game for Windows

Traverse a post-apocalyptic city, ravaged by an unknown virus, in search of safety.

I wish you to put many stages in between what is already there so it is longer!

I like the fact that such a minimalist game is very addictive and interesting. Even though it's short, and doesn't have a lot of mechanics, I still enjoyed just walking around and reading the notes, understanding what happened in that world, it had a very intriguing story that kept you playing. As for the visuals, I liked the color palette you chose and the pixel art. As for the music score, it was of very good quality and very well reflected the current situation in the world, was not distracting, and added to the feeling of the game for the player. Now, what would I change about this game? Although it's nice to just walk around and hear what's going on in that world, personally, as a game developer and gamer, I would add interesting and challenging obstacles and tense moments.

That was a great experience, short and hard-hitting with some brilliant worldbuilding

I haven't played it, I just like the pixel font here.

Simple yet effective.. Loved it! 😍

One of the best games I've played for a while. Really enjoyed it a whole lot. Is there any way I could donate to thank you for this masterpiece?

I don't have any way of accepting donations, but your kind comment and review is more than enough. Thank you for playing Resurgent.

Hey! I wanted to ask if I could port this game to the PS Vita? I don't need source code or anything, just your permission to upload as free homebrew. I will of course leave a link to this page as well.

If you want to take a look at my works, you can do that in my twitter https://twitter.com/m1s3ry_

Yeah, sure thing. Let me know if you have any problems.

Yo, after a long long time, I finally got around to finish the port

Thanks for porting it Madwolf, now I can say that I've made a game that is available on console :)

Liked this game a lot. Keep it up.

Yeah I did, although only the art style, not so much the story or gameplay.

This game has a great ending.

And it's been part of my memories untill that day.

Thank you for your comment Clokko, I'm glad that Resurgent had a lasting impact.

Just wondering if this game has multiple ending?

I liked the way you used the limited color palette to set the mood and also convey information about the world. For example black food items. The music and coughing also added a nice touch. I felt that the doors were sometimes difficult to see and it was not clear how the infected senses the player when I met them the first time. Great job!

art style is amazing.musics and soundtrack are realy good . STORY TELLUNG IS AMAZING . IT IS REALY GOOD GAME

The art style and soundtrack were absolutely amazing. The story ( while a little predictable.... ) was very nice.

You should really expand on this game man. It needs to be longer.

Thanks VCP, I'm glad you enjoyed playing it.

Loved the game, just curious what happened at the end?

*Spoiler alert* Did we really infect the sanctum? did everyone die because of us?

Great game, love the lore behind it. Nice end, but not a surprise, but nice. Maybe too short? Keep up the good work! :)

I love this game. Great atmosphere. Here's a video with some of my thoughts in deeper detail.

Absolutely loved the art style. I liked it so much that it was painfully short. Hoping for a second part, or even an extended Steam version. Congrats for this little masterpiece.

I enjoyed it. I dunno.. I think some people are being a bit harsh. Sometimes it's good to take a simple concept with minimal mechanics and run with it. How many games have down down the drain of history for just being overly ambitious? Too many to count I'm sure. Good job. I hope much was learned from this and will be added to your next endeavor.

Thank you for the kind words Morbott. However, (almost) every criticism I've read of the game is pretty fair, so I don't think people are being too harsh.  I've learnt a lot from the feedback I have received (both positive and negative), which I think is far more useful than everyone just saying "It's perfect 10/10".

I'm glad you enjoyed the simplicity of Resurgent, thanks for playing.

Loved the atmosphere and the art style. There were also some elements of immersion that I enjoyed very much, such as the character coughing now and then, his health worsening, having to lay down from time to time and so on.  The unveiling plot was also engaging to read, as well as the foreboding depiction of a post-apocalyptic aftermath.

However, I think the gameplay didn't quite live up to the other aspects of the game. It would have been nice to have more options as a player - the game mostly leads you by the hand, lacking any interesting choices, puzzle elements or any sort of challenge for that matter. Then again, this may have been a design choice, but from a player's perspective I think that it could have been a much better experience if the game wasn't so linear. There are moments where you think you made a choice, but when you decide to try the other alternative then you find out it wasn't actually possible to do that. The unlocked doors you can't trespass and the brick thrown by the character are examples of this.

However, I don't mean it's a bad game by any means - I enjoyed it and was really looking forward to what would happen next. In fact, I think the ending was well worth seeing. It's just that at times the game seemed to be testing my patience rather than actually trying to be fun.

I hope you find the comments constructive and hope to see more work come out from you! I'll certainly give it a try!

Thank your for playing and you're spot on with your criticisms of the gameplay. When I uploaded Resurgent, I kinda knew the gameplay was average but after watching some playthroughs and reading comments, I came to the same conclusion you have.

I think the main problem is that the two parts of the game (scavenging for food and avoiding zombies) are completely disconnected from each other and can't really stand on their own. The scavenging is just watching a bar go up and down whilst avoiding zombies is just waiting for them to turn in the other direction, which means that the game doesn't actually have any real gameplay.

My next game isn't going to have particularly advanced gameplay either, but I'm going to make sure it isn't frustrating like Resurgent can be.  Something that supports the story rather than getting in the way. Less linear level design,  (that promotes a sense of exploration and discovery), is also something I definitely want to try to do.

Anyway, thanks for taking to time to write out your thoughts. I'm still very new to game development and your feedback is incredibly helpful.

Glad to be of help. Looking forward to your next game, then!

Great game! Really enjoyed the feeling: the loneliness is overwhelming. Looking forward for more of your work :)

You could make this for Android in a couple days! Please?

Hi there! Any plans to make fuller version for steam?

Not at the moment. However, I do want to come back to Resurgent at some point, (when I have some more experience), and make a higher quality version of it. Thanks for playing :)

This was great! I thought it was just gonna be a neat little story and adventure, but it was so rich in the end. Great work :D

Oh my word, when I started playing this game I wasn't expecting to be taken on such a journey!

I was thinking there would be stealth (which there was), and survival aspects (which there also was), but I wasn't expecting there to be such a rich depth to the story itself.

Being given a little piece of the story at a time as our character continues his struggle to stay alive against all odds, and then reaching that ending... it all got a bit overwhelming! But the fact that it all hits so hard is testament to the fantastic storytelling abilities on display and the build-up of claustrophobia and the areas get smaller and darker before we reach a wide open space and potential freedom.

This was amazing! And I can't wait to see what other great ideas come popping out of your head! =)

This was so good. The story doesn't seem like much, just the average zombie apocalypse game. But once you actually play it... oh God, how do I describe it? The story is sooooooooooo good, and the game has a nice feel to it. Good job on this game.

I had a lot of fun playing Resurgent, it was a nice chill little break from the usual fare that I play, and I'm a real sucker for pixel art and silhouettes! I only wish it had a save point when you sleep.

Don´t have words for describe this. Is the second that make feels guilty of my decisions, and pity for the main character (and the first was GTA IV). If you read this, I´m really interested in traduce the game in spanish (I´m peruvian),  and I have to say this in spanish: ¡TE PASASTE DE CAGON, POR QUE TUVISTE QUE MATAR AL PROTAGONISTA?¡¡

Thank you for your interest in Resurgent. Unfortunately the English text is hard-coded into the game, making a translation of it very difficult. However, this isn't going to be the case for my next game, which will allow enthusiastic people such as yourself to translate it. 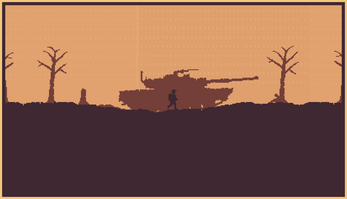 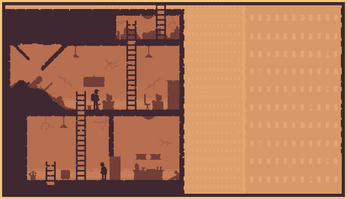 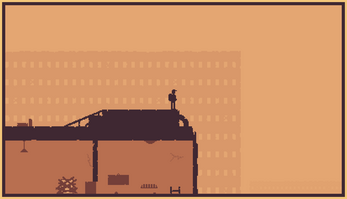 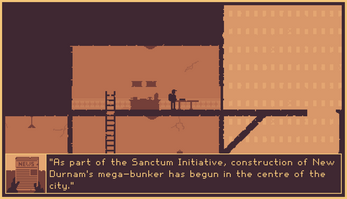